Everyone knows I love Christmas.  It is so sparkly and lovey and huggy.  I love it.  And I love Santa.  I know, I know.  Some people aren’t big into Santa.  But I am way into using him as a tool of bribery for the whole 24 days of December.  I DO NOT give my children great gifts from Santa.  It’s a whole thing.  I give them things like a book and a flashlight.  I want credit for the awesome gifts, like pogo sticks and bikes.  I need my moment of awesome.  Santa has flying reindeer, I have a Subaru Outback.  Give me this.

But really, let’s talk about Santa.  I mean, he is so great. Until we meet him.  Then he is the SCARRIEST MAN ALIVE!  Just ask Hank last year.  We were waiting in line and he could not wait to tell Santa what he wanted for Christmas.  He couldn’t decide what to ask for but had a few ideas he was tossing around.  Then it was our turn.  Hank went boneless.  He threw his pathetic body in front of Santa and refused to make eye contact or even acknowledge his existence.  When I forced him to be part of a picture he screamed “He is going to take me!  He will steal me!”  Yeah buddy, anyone who takes you will immediately regret their decision and return you to me.  I promise.

And then this year I was going to plan ahead.  I was going to have Santa activities and books and we were going to practice what to do and say.  I’m hilarious.  None of that happened.  So, I needed to think quickly.  We were leaving for Santa in 5 minutes and I saw a meltdown in the near future.  What would I tell another mom in this situation to do?  Level the playing field.  Yes!  I can do this in 5 minutes! The boys and I discussed if they had thought Santa was good all year.  They agreed he was.  Then we picked out small pieces of candy and put them in their pockets.  When we arrived to see our friend Santa, the boys offered the piece of candy and let him know they thought he had been good this year.  Hank sat on his lap for a very long time discussing candy, and then naturally reminding Santa of that pogo stick he really, really wants.  This was a drastic improvement from last year’s screaming fit and accusations that Santa was trying take Hank. 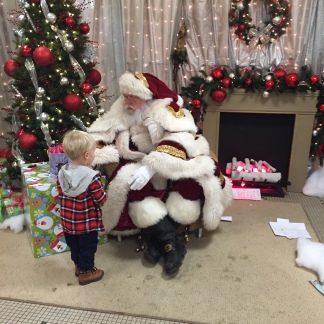 This was not only successful in leveling the playing field, but it is also helped with a tricky transition.  This whole Santa thing isn’t something any kid is familiar with.  I mean, they do it one time a year.  Giving them something familiar, like a small candy or toy, to hold and pass on to the big jolly fellow is an easy and simple way to ease right into this meeting. 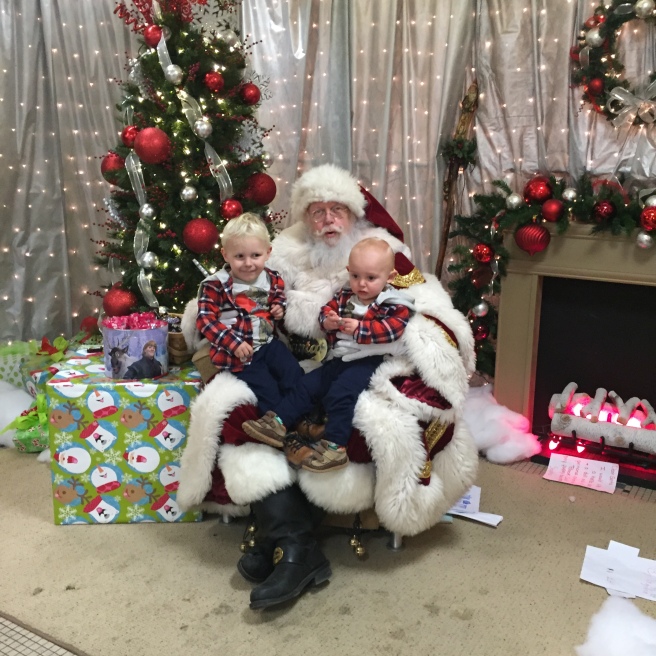 Please note that although this worked and both of my boys voluntarily participated in the Santa meeting, Gus was initially terrified.  But he felt it his duty to deliver his candy to Santa, and did his best to complete his mission.  Thatta boy, Gus.

And on top of it all, Santa informed my boys that this was the first present anyone had brought him.  It made Hank feel good that he made Santa happy.  And if Hank is happy, we are all happy…okay, not always Gus.