The dentist. Going to the dentist can be a little stressful. I am a grown up (mostly) and I still get a little stressed out. For a ton of kiddos going to a new place or trying a new thing can send them into a tail spin. My kids do great as long as they are prepared, which is true for most of us.

A while back I made a rookie mom mistake and scheduled Hank and Gus for their first dentist appointments at the same time. I hung up the phone and immediately regretted my decision. I really regretted it when I mentioned the appointments to John during dinner. Hank nonchalantly piped in with “I not doing that.” Great. One month until D-day. So the prep work started.

I started with a shark. Yeah. A shark. A giant stuffed shark. One with teeth all over the place. We counted them multiple times. Then a dinosaur. We cleaned those sharp teeth with a tooth brush and a wash cloth. And naturally we counted those too. Because we are really into counting.

We spent a full month doing this. No, not every day. Like once a week (when I remembered). Then the big day came. Hank woke up and I reminded him it was the day. He and Gus were going to the dentist to get their teeth counted and cleaned. He looked me straight in the eye and said “I am not. Gus can go.” Yikes. I went into clinician mode.

My favorite trick when working with kids that have behavioral issues is rewarding their success before it occurs. This means if I have a kiddo who has meltdowns every single session, I give them a sticker as soon as we start the session and tell them “I am so proud of how hard you are going to work.” (We also use this trick for Hank every night at bedtime.) So like the insane mother I am, I loaded the two boys into the car 45 minutes before their appointment and we went to Target. I explained to Hank that he was such a big boy and was going to do such a great job at the dentist so he could pick a toy. He carefully scoured the toy aisle and picked up and examined every single ridiculous item….a ball shaped like a cat, a Magnadoodle, a Mickey Mouse themed cell phone (he is attracted to anything under $5). And then he settled on the largest $1.48 ball I have ever seen. He could barely carry it. Gus NEEDED one too. So now we have two. 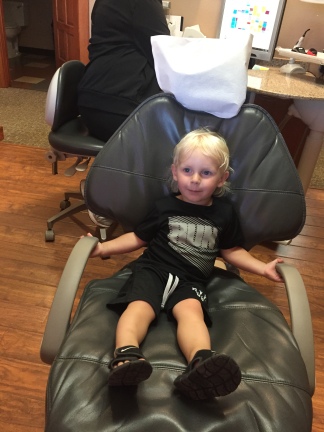 We walked into the dentist. I prayed a silent prayer. We sat in the waiting room and got out our little “Finding Dory” figurine. I handed it to him and he immediately began checking the teeth. The hygenist called his name and he tucked the little whale into his pudgy little palm as we made our way back. (This is where that comfort object doubled as a transitioning item.) The sweet hygienist asked if Hank wanted to sit in her special chair and watch cartoons. He said “Yes. You can clean and count my teeth.” I just about passed out. Then they asked for Gus. I told Hank I would be right next door and he assured me he would be fine. While I was with Gus in the next room, Hank would occasionally yell “Mom, I am over here. I am okay!” Gus wasn’t so tolerant. He didn’t cry but he did spend the entire dental exam swatting at the dentist’s hand. (And if you know Gus, this “old manish” behavior does not surprise you.) 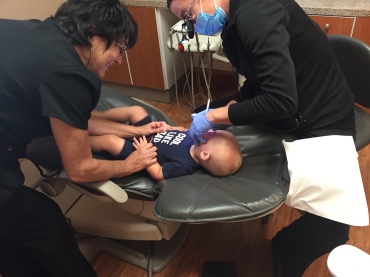 The entire visit was a success. He was prepared and knew exactly what he was in for. He had already succeeded before he even walked in the door. Also, he had something familiar to take with him that made him feel safe. When they offered Hank a prize at the end of the visit he informed them he already got his. The great people at Great Plains Dental gave them both a balloon tied to a car as well as a little bag with a toothbrush and flossers in it. Hank is really into the flossers. 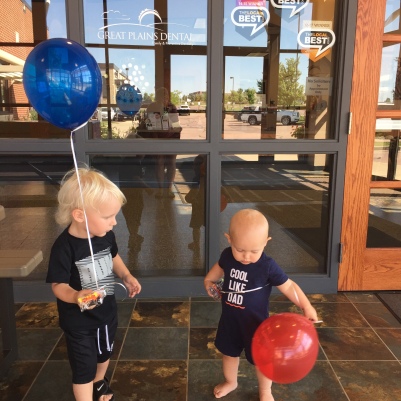 When Hank is asked about his first visit to the dentist he typically responds with the following facts: “I wore sunglasses and watched toons on the top of the room. A lady painted my teeth. My mom bought me Donald’s and she never do that. Only Grandma and Aunt Beth do that.” All of these things are true. He has asked when he can go again. I think mostly because he wants the Mc Donald’s.

2 thoughts on “Counting Teeth: Prepping for and Transitioning to the Dentist”